I didn’t catch the opening of Iron Man 2 yet, but several things I’ve read about the movie have got me worried.  I have no expectation that it will be as good as the first one; I’d be happy with merely decent.  My worry is that the Iron Man movie franchise has already completely jumped the shark.  To assess the situation, I’ve identified five signs that a superhero sequel has gone to very bad places.

(Note: My main focus here is on superhero movie series that start out at least decent and become quite indecent.  So there is no place for, say, Fantastic Four in this analysis, since that series had nowhere to go but up after its frightful start.)

As a franchise goes on for one or more sequels, some brilliant producer inevitably gets the idea, “Hey, wouldn’t it be cool if there were two supervillains in this movie?”  Alas, it is rarely cool.  Mostly it just leads to a crowded cast and a 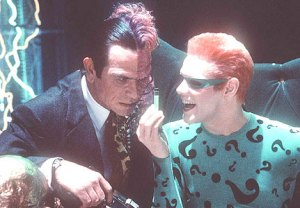 crowded script, and lots of cornball moments.  An early example is Batman Forever, when the Riddler finds Two-Face in his lair and basically says, “Hey, we’re both supervillians with weird fetishes and a shared hatred of Batman.  Let’s team up!”  Jim Carey’s over-the-top humor almost makes it work.

More recently, Spider-Man 3 had a major supervillain overdose, with Sandman, a new Green Goblin (Harry Osborn), and Venom all crammed into one plot.

There are notable exceptions to the rule, of course. Batman Begins worked perfectly fine with both the Scarecrow and Ra’s al Ghul – but in that case, Scarecrow was working for Ra’s al Ghul from the start – very different from an awkward team-up or a jigsaw puzzle of disparate plots.  And, of course, at least two X-movies did okay with a team of super-villains.

Things don’t look great for Iron Man 2 on this count, with both Justin Hammer and Blacklash/Crimson Dynamo taking the stage.

The superhero going bad seems to be a low-hanging fruit for comic-book sequels, often for fairly contrived reasons, and almost always with disastrous results.  The first superhero sequel to go this route was probably Superman 3, wherein Supes goes bad after exposure to faulty kryptonite mixed with cigarette tar. But, without a doubt, the most painfully egregious offender on this score is Spider-Man 3, in which possession by the black suit makes Spidey go evil, exposing millions of unsuspecting fans to Tobey Maguire dancing awkwardly to disco music.  A lesser offender is X3: the Last Stand, with Jean Grey transforming into the evil Phoenix. 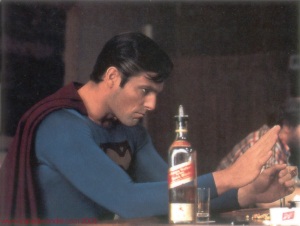 Also of note are the clever visual cues directors use to indicate the hero’s new, evil-fied persona:  evil Phoenix’s veins pop out of her skin; evil Superman is unshaven, has a tan, and a costume that looks like it hasn’t been laundered in a while; and, most frighteningly of all, evil Peter Parker has bangs.

I’m not sure how they’d depict an evil Iron Man, since Tony Stark already has a beard and what-not, but it does sound like Stark is a bit of a jerk in Iron Man 2, but far from full-on evil.

3. The More Plots the Merrier

This one is a close corollary of indicator #1.  As villains proliferate, so too do the number of plot convolutions.  Many storylines are crammed together – some of them even interesting! – but none are explored in-depth because the script is just too crowded.  Witness Wikipedia’s sad attempt to briefly summarize the premise of Spider-Man 3:

The film begins with Peter Parker basking in his success as Spider-Man, while Mary Jane Watson continues her Broadway career. Harry Osborn still seeks vengeance for his father’s death, and an escaped convict, Flint Marko, falls into a particle accelerator and is transformed into a shape-shifting sand manipulator. An extraterrestrial symbiote crashes to Earth and bonds with Peter, influencing his behavior for the worse. When Peter abandons the symbiote, it finds refuge in Eddie Brock, a rival photographer, causing Peter to face his greatest challenge. 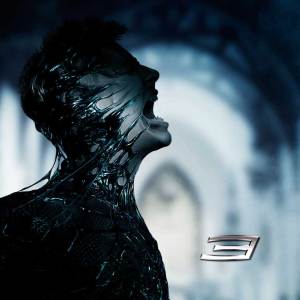 Yikes.  A more distressing example was X-Men: The Last Stand, which took two awesome storylines directly from the pages of the comic books (Chris Claremont’s classic Dark Phoenix Saga and Joss Whedon’s more recent “mutant cure” story), and then put them in a blender to make one awful mess of a movie.

No one seems able to summarize the plot of Iron Man 2 in three sentences or less, which has me worried.

At some point in any superhero series, the standard superhero love interest gets boring, and convoluted love sub-plots often ensue.  And so we have Lana Lang 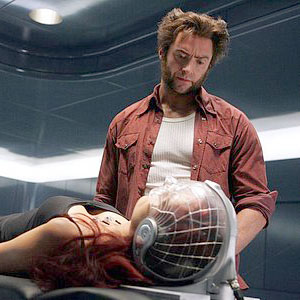 attempting to fill in for Lois Lane’s absence in Superman 3, Cyclops getting killed off so that Wolverine and Jean Grey can have more sexy screen time in X3, and a lazily undeveloped love triangle between Peter Parker, Mary Jane, and Gwen Stacy in Spider-Man 3.

With both the Black Widow and Pepper in Iron Man 2, this may be yet another sign of danger…

As you may have noticed, I’ve picked quite a lot on Batman Forever, Spider-Man 3, X-Men: The Last Stand, and Superman 3.  All four represented turns for the worse in series that, up until that point, had produced movies that were at least decent, if not excellent.  One final thing they all have in common is that they were all the third in the series.  So perhaps there’s still hope for Iron Man 2!