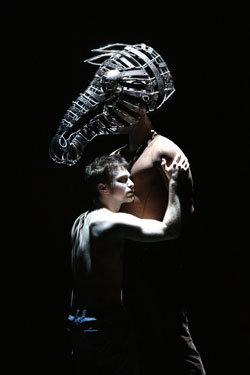 Saw Equus this weekend on Broadway and it what was well worth it.  Everybody’s talking about Daniel Radcliffe, because he’s the sensational, big (and somewhat unexpected) name that’s been getting the attention of the press and audience-goers.  He was very good – and he clearly has a range that goes well beyond Harry Potter – but in some ways he’s the least interesting thing about the show.  Richard Griffiths is the one who stole the show, IMO.  He’s one of those actors who could read the phone book and make it seem riveting.  He has some long monologues as the introspective psychiatrist who’s as sharp as a whip but full of regrets, and he makes them all work brilliantly, even when they fall a bit too heavily on the explicit side for me.

But actually the best part may have been the horses, which were portrayed by some amazing dancers, made up only with a horse-like headpiece and silver hoof-like shoes.  In the age when the Lion King and Spider-Man (yes, Spider-Man) are made int o Broadway musicals with Hollywood-like special effects, it was refreshing to see a show that let the audience’s imagination do some of the work.   The effects in The Lion King were amazing, but it was such an exact duplication of the animated movie that it felt more like a technical achievement than an artistic one. In Equus, the illusion of the horses is made real by the movements of the actors and the imaginations of the audience, which makes it feel much more magical.