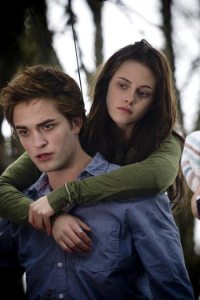 usical 3, so we didn’t really have any choice.

Wait, no, I need to start earlier.  This past summer at the life-changing, high-altitude Taos Toolbox writing workshop, Kelly Link (amazing writer and mindblowing instructor) provided a fascinating, detailed description of the “sparkly vampire” genre. And it made me think, “OMG, I have got to go check out this sparkly vampire stuff!” So I went out and read Twilight.

In retrospect, I should have realized that Kelly Link’s description of a thing is very likely to be far more interesting than said thing itself.

For those of you unfamiliar with the plot (of both movie and book), the short version is below the fold.  Spoilers abound, if such a thing is possible.

Bella is an ordinary angsty teenage girl who has to move to the cloudy town of Forks to live with her father.  Sitting in the high school cafeteria, she can’t help but notice Edward, a pallid, muscular boy who’s the hottest thing she’s ever seen.  (Many pages are, in fact devoted to how hot Edward is.) At first Edward seems to hate her, but then they have witty repartee while looking at cellular slides in biology class, and then he stops a car from hitting her, and then he saves her from being raped (because that’s how you can tell a male character is heroic).

Smart Bella figures out that Edward must be a vampire, and Edward makes some true confessions: he is not only a vampire, he’s telepathic, and in the sunlight, he sparkles.  It’s actually very tragic, the sparkling.  Also, Bella smells very good to him, like a hot dog you just have to eat, and that’s why he’s been avoiding her.  They start dating, despite the century gap in age, the hot-dog concern, and the many other dangers of mixed living-undead relationships.

The whole thing is very retro, and not in a fun, steampunk way.  Didn’t Buffy the Vampire Slayer slay the helpless teenage girl trope?  And what is up with the whole I-must-resist-sucking-your-blood as a metaphor for the importance of teen abstinence?

My questions and concerns abound, but one rises above all the rest.  Edward and his family are all decades old, and here they are attending high school.  At one point, in both the movie and book, Edward casually explains that when they move to a new place, they start out pretending to be as young as possible, because that way they can stay longer.  Hence, they have a collection of dozens of graduation hats.

A minor point, perhaps, but, really, the whole immortals-repeating-high-school thing was the most speculative element of the story.  Even the tragic sparkling had more credibility.

If you do go see Twilight, I strongly suggest reading “Ten Things You Should Know About Twilight” at Fantasy Magazine, to properly prepare yourself for the experience.

9 thoughts on “Twilight: Questions and Concerns”